Although it may be hard to believe now, there was a time when town planning in Australia had celebrity status.

For instance, when the City of Sydney Strategic Plan was released in 1971, it captured the imagination of the population. About 500 people purchased a copy of the plan on the first day it went on exhibition, the SMH reported, and 100 people made written comments at the Town Hall display area. Other media reports said the plan sparked ordinary folk in the street to actively debate the value of “floor space ratios” – don’t think there is any chance of that happening today! 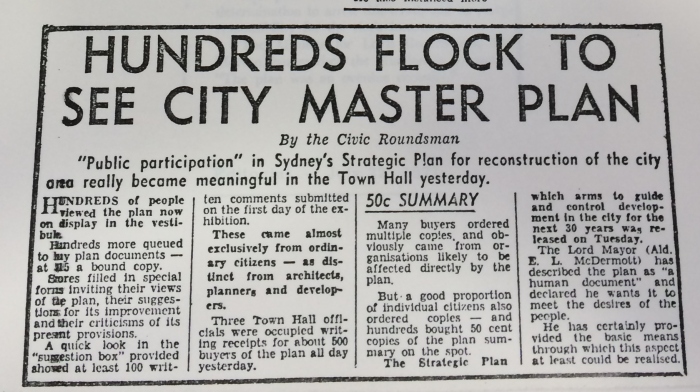 The plan, prepared by consultant George Clarke, is simply a delight to read. It slowly and carefully walks people through the challenges facing the city centre and then presents solutions.

It uses simple, plain English – without any jargon – and recommendations are supported by interesting diagrams, photographs and artist’s impressions (not just stock images like so many of today’s publications). No wonder the Lord Mayor of the day said it was a “human document”. 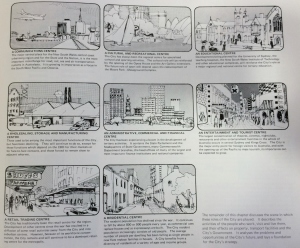 These days there is little question that it is difficult to get genuine, broad-based interest in strategic town planning issues. Most people only really engage when something is proposed which impacts on their property value.

Many people have a theory as to why this is the case. Mine is that planning has become so bogged down in legalese and technical terms that it becomes impenetrable and actually quite scary.

It’s a disease that starts at the top – the legislation which controls planning issues – and then infects all manner of reports and documents mean for public consumption.

For instance, what about this statement from the current Environmental Planning and Assessment Act (EP&A Act).

Glad that is cleared up then!

What it seems to be saying that a council’s local plan can over-rule covenants attached to land titles (such as a covenant which says only brick homes can be built in an area).

And don’t tell me that paragraph above isn’t just a load of hot air (churned through a wind turbine mix master). Just like the wind farm document I once read at the Department of Planning and Infrastructure which referred to “sensitive non-associated noise receivers”. That would be neighbours.

Some pieces of legislation are at least presented in an easy-to-read “question and answer” format. The Commonwealth’s Environmental Protection and Biodiversity Conservation Act does this – the name of each section poses a question and then the text in the section obliging answers it.

The 1993 Local Government Act was originally published using this carefree, “star-crossed lovers” approach. However, as amendments have been made, legislative drafters have lost their sense of romance and decided the “question and answer” format should be abandoned. As a result, we’ve ended up with brutal section heads in the Local Government Act like “218D Exercise of functions under secs 218A and 218B”. In other words, not the sort of thing you would roll out to woo your Valentine.

And, who out there in general public land could really be expected to know the difference between the “exempt”, “complying”, “code assessable” and “development without consent” development categories.

The last one is a doozy – try explaining to someone that something described as “development without consent” actually requires to be approved before it can proceed (usually by a public authority). And then when you look up the EP&A Act, this phrase isn’t even listed.

And one more example I just have to get off my chest. Whoever named the long park and cycle track alongside the M5 East expressway as “M5 Linear Park” should hang their heads in shame. Is it possible to just be a little more creative – perhaps “Expressway Green” – something, anything!

In all fairness, the State’s proposed new planning system is desperately trying to get planners away from negative technical language (usually the domain of development control systems) and back to positive language in sound strategic planning.

The website Planetizen recently suggested that planners should look to Mad Men character Don Draper for inspiration when it comes to marketing planning. It is a story worth reading at http://www.planetizen.com/node/67135

It’s now also the case that some planners need to be re-educated about ‘plain English’ writing. Ku-ring-gai Council communications manager Tiffiny Kellar in 2012 sent her planning and other staff on a course to help them to write for the general public – see http://www.dailytelegraph.com.au/ku-ring-gai-council-staff-go-back-to-school-to-learn-art-of-plain-speaking/story-e6freuy9-1226445951772

She stated “it was like a light bulb was turned on when people could see the sentence rewritten in plain English.”

There is no question that planning will increasingly need to rely on visual images such as videos, artist’s impressions and infographics.

But nothing beats some clear, plain English.