The story focussed on Ashleigh, 21 and Amy, 17 from Mt Druitt in western Sydney, who are both currently out of a job and apparently have absolutely no plans to get one.

“I’d die before I spend time in an office,” Ashleigh reportedly said.

“I call in sick when I’m over it and then they just get rid of me,” was Amy’s alleged contribution in the interview with the newspaper. 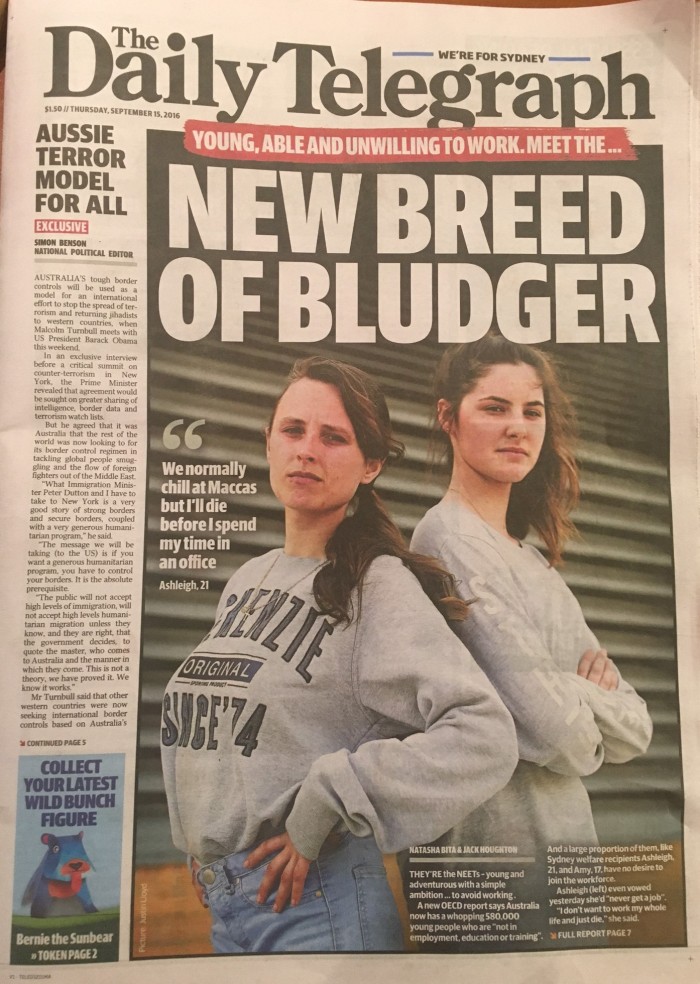 If the two woman were quoted correctly, it’s quite unbelievable stuff.

At a time when the State of New South Wales (NSW) has Australia’s lowest unemployment rate, and generally a burgeoning need for workers to drive its economy, these two women – on face value – are refusing point blank to work and instead seeking to collect government benefits.

Ashleigh and Amy are part of a growing problem which if not solved, means older Australians could be forced to stay in the workforce for longer and therefore not be able to enjoy the same number of retirement years that previous generations have taken for granted.

The two women were sought out by the Daily Telegraph because of the publication of an Organisation for Economic Co-operation and Development (OECD) report on Australia’s big problem with youth unemployment.

This report found that 580,000 young people aged 15 to 29 in Australia in 2015 were “not in employment, education or training”. The report therefore labels these people NEETs.

Some of these 580,000 people are looking for work, or have expressed a desire to work but were not searching for a personal reason.

We know that in Western Sydney, where Ashleigh and Amy are based, there are crippling issues with skills shortages, with seven out of ten businesses not able to access the qualified workers they need.

We also know that the NSW Government has fee-free training scholarships specifically targeted to improve the skills of the young unemployed.

The OECD report says the answer is to improve the quality of vocational education (including in high schools) and to improve access to childcare. These are laudable suggestions, but don’t seem to do anything to address how to entice – or force – unwilling people into work.

The real problem is that if young people are not working, then the necessary labour force can really only come from one other area – older workers. And that means we all may be required to work later into life.

The NSW Government’s recent Jobs for the Future report, launched in late August, outlined the need for us to look for new avenues to encourage increased labour force participation and the problem that youth unemployment forms as part of this.

This report found that NSW has experienced a booming jobs market over the last 20 years.

However, it also found that if NSW is to repeat this success in the next 20 years, then everything needs to be done to get more elderly people, women with children and young people (particularly in regional areas) into the workforce.

It warns that, due to demographic changes, there may be just three working-age people for every two younger or older dependents in 2036, not four as there is now.

In particular, it noted the big problems with youth unemployment, particularly in Western Sydney and regional NSW, and has a target to reduce this.

Many other areas in the world have the problem of too few jobs and not enough workers.

For us, the problem is the opposite.

This means the workers need to come from somewhere – and that problem gets all the harder when young able-bodied workers with the potential to access skills training – do not want to actively look for work.

There really is no excuse not to work at the moment – even if you don’t like being stuck in the office you can be out and about picking up odd jobs on sites like Airtasker or more skilled work on sites such as Freelancer.

My message to the youth of today is clear: please get to work to save my retirement.